U.S. responsible for 82% of all gun deaths in 23 high income nations 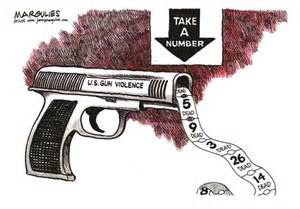 
"While the United States has failed to significantly reduce its annual rate of gun deaths, other high income countries have been making steadier progress, resulting in a wider gap between the U.S. and its international peers when it comes to fatal shootings."

PubMed under the NIH said:

Researchers David Hemenway and Erin Grinshteyn found that "...firearm homicide rates were 25 times higher in the U.S. than in other high-income countries." That is compared to 2003 when it was 19.5 times more than comparable countries. As the number of guns on the street goes up, so do the deaths by firearm violence.

The American public must continue to stand up to the gun lobby and put organizations like the National Rifle Assn. (NRA) out of business.
at January 29, 2016