The assault has started on Bernie Sanders 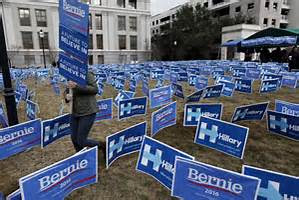 First Hillary says Bernie Sanders is no Barack Obama from 2008 because Sanders can't galvanize the African-American vote and he will not dominate caucus contests. To begin with, he is leading in the Iowa caucus and in one recent month his ranking in So. Carolina jumped 17%, the latter heavily populated by African-Americans. So the battle begins between two fully qualified opponents with only one with the right mandate.

And then there's the Democratic establishment, "As he faces the toughest onslaught of his political life over the next 11 days before the Iowa caucuses, Sanders will have to go it nearly alone," says Alex Seitz Wald on MSNBC.  So far he hasn't needed this group of die-hard party hardliners. Bernie Sanders' supporters are not the kind who listen to the establishment so this palaver will fall on deaf ears. And wherever they are coming from, new ones are added daily.

More on this tomorrow.