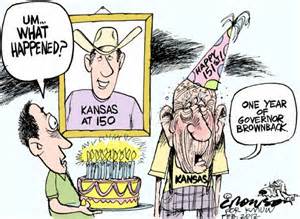 Kansas Gov. Sam Brownback has now decided to do away with the state court system...if they don't do his bidding. It has something to do with state courts taking away some of the powers of the Kansas Supreme court in connection with 2014 rulings on education. It ruled the state of Kansas failed to provide equity in public education as required by the state constitution. This was a part of Brownback's typical Republicanized budget which has put the state in dire financial straits. If Kansas courts agree with the Gov. they can go on their merry way. If not, their funding is cut.

This guy is almost as crazy as former Arizona Gov. Jan Brewer, who passed the loose gun laws in her state that Brownback copied recently, posted by me in April.

But Brownback wasn't finished. Just recently the Republican governor indicated he was planning to expand Secretary of State Kris Kobach’s (R) authority “to prosecute voter fraud cases.” Even those state prosecutors have decided not to take to court. Voter fraud is a big GOP issue, which has been proved to be a huge exaggeration by the right, and is actually a cover up for forcing a certain Democratic block from the polls. Kobach's new powers are designed to do just that.

Sam Brownback has shown once again just how pig headed Republicans can be and just how steeped in their stupid ideology they are.