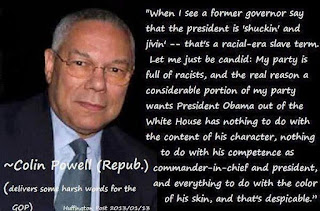 Former Sec. of State Colin Powell accused the Republicans in Jan. 2013, of having "... a dark vein of intolerance in some parts of the party." It was former Alaska Gov. Sarah Palin who used the term to say that the president is "shuckin" and "jivin," referring to Barack Obama. I grew up in the South and that's about as racist as it gets. But coming from a double-digit IQ like Sarah Palin, well, what do you expect? Powell doesn't mention it by name but during that period of time the far right conservatives responsible for racial attacks were the Tea Party.

Move ahead to March of 2015 and Colin Powell again speaks out against the GOP and its continuing racist views. It was in a "This Week" interview when he said “I still see it. I still see it in the Republican Party and I still see it in other parts of our country. You don’t have to be a Republican to be touched by this dark vein. America is still going through this transformation from where we were just 50 or 60 years ago.” I lived in the South in the 50s and 60s when the phrase "shuckin" and "jivin" was only one of the offenders to black folks. They had to live with the "N" word every day, and not just behind their backs, but face to face in a confrontation they knew they could not win.

Racist have cleaned up their act slightly, mostly due to a somewhat less tolerant public, but the seething hatred is still there with little hope it will go away.
at June 14, 2015