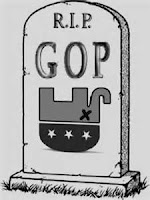 In a study by Gallup in the way Americans define themselves politically, conservatives no longer lead the pack. The rise of the Progressives/liberals makes them equal to social conservatives at 31% each for the first time in 15 years. Conservatives dropped from 39% to 31%. Progressives rose from 21% to 31%, a two point increase advantage. Can anyone wonder why? Let's see, Geo. W. Bush went into office on Jan. 20, 2001, and served for eight years. That, alone, would push the borderline/moderate conservatives to change their loyalty.

Barack Obama was sworn in on Jan. 20, 2009 and it was almost immediately that Mitch McConnell made it known that it was his number one priority to make sure President Obama was a one-term president. He didn't; in fact Obama beat Mitt Romney handily in 2012. But McConnell's hate campaign turned the U.S. Senate into a bunch of laughable hyenas and it has never recovered. Then the House was taken over by Republicans in 2011, and John Boehner, the new Speaker, has made it his personal cause to oppose every idea and piece of legislation President Obama has come up with.

But the House infiltration of the Tea Party has perhaps been the most damaging to this country in ages. When you add to that Ted Cruz--one of the laughable Senate Hyenas--almost shutting down the government in 2013, well, you can understand a shaky conservative block that said, 'enough is enough.' In another war of matching numbers Gallup finds Democrats jumping from a low 37% to 53% leaning toward liberal issues. Likewise Republicans dropped from 67% to 53% in their ideological identification on social issues.

What does this mean for 2016? You only have to look at who is the biggest Progressive out there. Bernie Sanders.
at June 02, 2015