Bernie Sanders is Packing All His Rallys 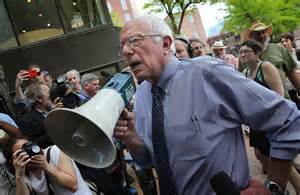 It all started out small but with big expectations that have proved to be correct and, perhaps, surprising to everyone but Bernie Sanders himself. He drew five thousand in his Vermont kick-off rally. Three thousand in Minnesota. Largest crowd of any candidate this year in Iowa. It was standing room only in New Hampshire. But Wisconsin proved to be the best news where he came in a close second to Hillary Clinton in the state straw poll. It was 49% to 41%, leaving Martin O'Malley at only 3%. Although straw polls are not rocket science, it is a measure of the support for the Senator.

As Alex SeitzWald said on MSNBC, "...it shows a desire for an alternative to Clinton and an interest in Sanders among the party’s most committed members, at least in Wisconsin." It would be nice to see the results of a straw poll pitting Bernie Sanders against Wis. Gov. Scott Walker, another presidential contender. At the end of May CNN had him at 15% support from Democratic voters nationwide which triples where he was a month prior. I'd like to see Nate Silver's predictions for Sanders with these early results.
at June 10, 2015