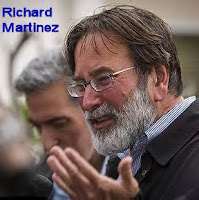 He lost his son, Christopher, in the Isla Vista, CA shooting near the UCSB campus, where he was a sophomore. Richard Martinez said soon after the shooting, "Why did Chris die? Chris died because of craven, irresponsible politicians and the (National Rifle Association). They talk about gun rights -- what about Chris' right to live?" How many times now have grieving parents had to come to grips with a loved one's death due to gun violence? It's vast but in each case it comes down to two things: a gutless Congress and the National Rifle Assn. (NRA). Unwilling to pass the gun control laws that will make this stop. However, Martinez has thrown down the gauntlet exclaiming:


"I have chosen to make this my life’s work. In choosing to do so, I was aware that the path to changing laws and minds would be challenging. I was still surprised to see how entrenched the gun lobby is with certain state legislators and the dangerous degree to which it pushes bills that endanger public safety."


Martinez charges members of Congress with backing anything the NRA introduces for an endorsement by the organization. Some of this legislation he calls "outrageous," such as a bill they are pushing this year to allow access to guns for domestic abusers. This should drive any sane individual up the wall, especially the abused. In Florida he joined legislators, students, moms, and members of law enforcement to fight six separate guns in schools bills. They all lost so it can be done. Add to this Gabby Giffords group, Americans for Responsible Solutions and the former NY Mayor Mike Bloomberg group, Everytown for Gun Safety, and I would say Richard Martinez is traveling in the right circles.
at June 01, 2015