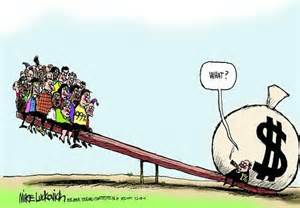 Economic inequality, which includes income inequality, has been growing at a rapid pace in the last few years making the middle class and the poor the losers. The only ones to reap rewards are the wealthy...that despised 1%. But a new Pew Research study says the Republicans/conservatives like that just fine and want to leave it that way. In the latest Washington Post/ABC News poll this question was asked:


“Do you think the federal government should or should not pursue policies that try to reduce the gap between wealthy and less well-off Americans?”

The results shouldn't surprise Progressives but it should shame conservatives. Republicans don't want to do anything about it and white evangelical Protestants are evenly split on the issue. In reverse, Democrats and Independents support efforts to address the wealth gap and 62% of all American adults believe the government should try to reduce the huge chasm. With only 31% believing otherwise, that’s a 2-to-1 advantage.

Add to this the fact that a majority of Americans regardless of race support actions to reduce the wealth gap, as well as by age, gender, level of education, household income and geographic region. What we have is a broad consensus that this is an issue worthy of national action.

This 62% figure, which includes Progressives and Independents, leads me to the conclusion that a recent post of mine, "Hail-Hail...Conservatism is Declining," predicts the future of American politics.
at June 06, 2015