Argument Over Beer Ping Pong-Where Did he Get the Gun? 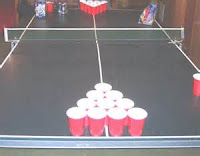 There was a party for Texas A&M graduate Landon Duke in College Station, and now 19-year-old Lacie LaRose is dead, killed by 39-year-old party-crasher Ronald McNeil. The whole problem erupted over a disagreement about the rules of Beer Ping Pong. McNeil said it was an accident but he fired off 14 shots to get the job done which might indicate a fit of rage since he had been thrown out of the party. McNeil lived across the street from Duke and was a convicted felon. I know we're talking about Texas but where did he get the .40-caliber Glock gun?

Ronald McNeil is currently being held in Brazos County Jail on charges of murder, deadly conduct for discharge of a firearm and two counts of aggravated assault with a deadly weapon. A 19-year-old young lady's life was snuffed out just like that, once again using a gun. One of 300 million in the U.S. With many states that have extremely loose gun laws. Texas being one of them. From now on I would like to see the media leave these stories of gun violence open until it has been proved where the gun came from. Maybe then the public will understand just how stupid is the National Rifle Association's call for more guns on the street.
at June 12, 2015