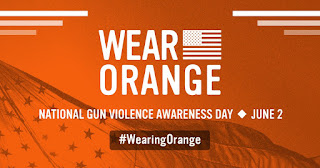 Today is National Gun Violence Awareness Day, sponsored by Everyone for Gun Safety Action Fund. Celebrities like Julianne Moore helped make this first event successful in spite of being panned by the National Rifle Assn. (NRA). The NRA "attacked the campaign as 'pointless' and said 'participating is an easy way of scoring points for being 'socially conscious.'" I have heard this organization lower itself in similar statements before so nothing is surprising anymore. What is surprising is that the NRA is still around to do this kind of damage after the thousands of gun deaths it is responsible for. The cry of "Wear Orange" is a symbol for the value of human life everywhere and honors the January 29, 2013 shooting death of 15-year-old Hadiya Pendleton who was killed by gangs on Chicago's south side. People are wearing orange all across the country today in an effort that is quickly burgeoning into a full blown movement to get guns off the streets.
at June 02, 2015