Arizona Stupid Laws Just Get Stupider-Doctors Have to Sue 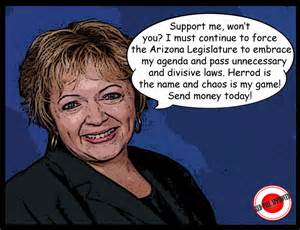 The Arizona legislature is capable of passing the most brainless laws of any state in the country, evidenced by the loose gun laws this state has. All it takes is a warm body to buy a handgun and then walk right in a bar and buy a drink. But Cathi Herrod, pictured, is responsible for some of the worst on the books, like the latest, a law that requires abortion providers to tell patients that it is possible to reverse a medication abortion. The American Congress of Obstetricians and Gynecologists, argue there is no "credible, medically accepted evidence" that a medication abortion can be reversed. But this dumb bunch of wingnuts in the Arizona legislature let this radical fruitcake, Herrod, convince them to pass the bill.

Scottsdale physician Julie Kwatra, the legislative chairwoman for the Arizona section of the American Congress of Obstetricians and Gynecologists, said the law violates doctors' ethics and is harmful to the doctor-patient relationship. Arizona Republic Opinions states:

"The law at question requires doctors to tell patients they can reverse a medical abortion by quickly taking high doses of progesterone. There are no studies supporting this view, just anecdotes and the belief of anti-abortion advocates. Other doctors say they've seen the abortion pill fail when a woman doesn't take the second dose."


"This is a case where the state's response should be:Yeah, you're right, the Legislature was wrong. It won't be, of course, because lawyers are paid to make the best argument possible, even when they have nothing."

When will the people of Arizona who vote for these blockheads wake up and realize they are ruining our state?