Bernie Sanders Must Come Out NOW for Minority Vote for Credibility 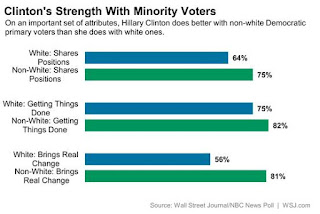 The Bernie Sanders team should look at this graph and decide today to point their candidate in the direction of the minority vote. I mean African American and Hispanic specifically. A better place does not exist to prove his point of economic and income inequality than these two voting blocks. I did a post back in May that outlines his positions and voting records on race and immigration. They are favorable on both but Sen. Sanders is not making this clear to the public. If they don't know you want their vote, they won't vote for you Bernie.

Jason Johnson of NBC News did a piece asking the candidate questions for African Americans on whether they should vote for Bernie Sanders. First of all there is the implication that Sanders has slim or no chance for winning. This group did not even support Obama until he won in Iowa, but in Sen. Sanders last trip to Iowa, he did great with large crowds at his events. And Johnson wants to know if the candidate understands African Americans when they make up only 1% of Vermont's state population. He pursues this question with another, "how he plans on galvanizing this crucial demographic in order to win a national election?"

This could be the big year of the Hispanic vote since people who harass the Mexican community like Arizona Sheriff Joe Arpaio have been put in their place, thus, many who were in the past, won't be afraid to come out and vote. This could change, though, if voter ID laws persist and there are 32 states that enforce this that you can see here. Hispanics voted for Mr. Obama en masse in 2008 and especially in 2012, and recently Bernie Sanders said, “We have 11 million people in this country living in the shadows, living in fear. That’s got to end. We need a path toward citizenship for all of those people.”

Bernie Sanders must make racial and immigration reform an integral part of his campaign and do it soon. Without it he cannot win.