Fox News is Light on Substance but Heavy on Legs 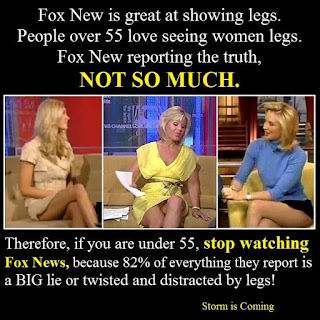 Female news anchors from the "real" network stations like ABC, CBS and NBC are usually positioned conventionally behind a desk, not to necessarily hide their legs but to prevent anything like a potential crotch shot. That's what we called it when I worked in TV in the 50s and 60s. As I told someone recently, there were no female news people in those days and once when I tried to audition a gal at the station where I worked in Memphis they almost rode me out of the studio on the rails. But that has all changed as you can see in the featured picture. Fox News has taken the art of dress and leg manipulation to a new high.  Brian Kilmeade of the Faux News network said:


"To be a female anchor on Fox News, the only qualifications is to look like you’re coming from the Victoria’s Secret catalog, and be able to speak."

This coming from an insider who said "be able to speak," but did not add 'be able to think.' It's bad enough that the network's news is mostly inaccurate but when they lower themselves to relying on legs and boobs to get the viewer's attention, it just shows what a pathetic organization they are.

And then we have Katie Couric, Diane Sawyer, Ann Curry, Jane Pauley, Joan Lunden, Erin Burnett, Connie Chung and Jessica Savitch, just to show there are legitimate female anchors out there.

I can truthfully say that I have never watched a Fox News presentation and after writing this piece I never will.
at June 06, 2015