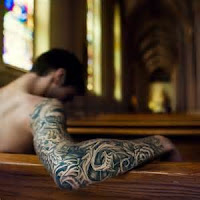 A site by the name of Rapture Ready is saying real Christians shouldn't have tattoos. Here's the reference:

Lev. 19:28 says, “Ye shall not make any cuttings in your flesh for the dead, nor print any marks upon you: I am the LORD.” Yet RR adds that DEATH is the number one tattoo.

Continuing, "it's not Christian, it is associated with paganism, demonism, Baal worship, shamanism, mysticism, heathenism, cannibalism and many other pagan beliefs."

RR says the Bible also condemns all rebellion, which is only realistic in a perfect world, not the kind we live in today. Further, "the tattoo has always been an indication of a spirit of rebellion and deviancy on its wearers," claiming that the Biblical passages "declare that rebellion is as bad as witchcraft."

Okay, I personally know several people who profess to be good Christians that have multiple tattoos. The site reiterates over and over that the tattoo has its roots in beliefs and practices that are demonic and pagan, continuing..."it is intended to put the human soul in harmony with supernatural forces."

I am sure the tattooed Christians I know have no idea they are headed for hell and damnation, but even the strongest of believers should wonder about some of the statements made on this site. Rapture Ready claims the end is very near so you tattooed Christians had better start scrubbing today.
at June 16, 2015