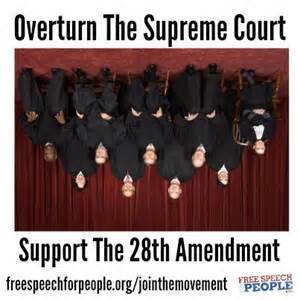 If there is one thing this country can do to balance the political scales in favor of the people it is to overturn the Citizens United ruling made by SCOTUS in 2010. John Roberts and his activist conservative renegades literally put the wealthy and corporations in charge of elections. The flow of dark money has been unlimited and forced some to rethink their candidacy. New Mexico Democrat Tom Udall proposed a Constitutional Amendment in 2014 that was backed by 54 Senators but was stymied by a Republican filibuster that stopped any action.

Enter Bernie Sanders, who had been an advocate for repeal since it was passed into law, who said, “I am extremely disappointed that not one Republican voted today to stop billionaires from buying elections and undermining American democracy." So now it goes back to the grass roots level to gain momentum for the proposed 28th Constitutional Amendment. John Bonifaz, president of Free Speech for People said, “We have amended the US Constitution before in our nation’s history. Twenty-seven times before. Seven of those times to overturn egregious Supreme Court rulings. For the promise of American democracy, we can and we will do it again.”
at June 12, 2015