Money Should be Drummed Out of Politics 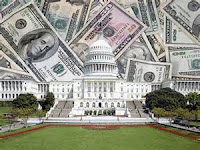 "We have all seen how the influx of big money distorts our agenda, limits competition, and undermines democracy. With Fair Elections, the power rests with voters, not special interests.” This was said by former New Jersey Senator Bill Bradley who now chairs Americans for Campaign Reform. One only needs to mention the Koch Bros. to confirm how money is buying GOP elections today. Their budget for 2016 is $889 million. But Democrats are doing the same thing and in a Politico piece they were accusing Republicans in 2014 when in fact they actually finished ahead among the biggest donors. George Soros is a billionaire liberal but OpenSecrets.org says:


"When it comes to the combination of institutional lobbying, 527 group donations and PAC expenditures, Koch Industries far out-spends Soros’ hedge fund and think tank, $57.4 million to $12.8 million. Most of this money is attributable to lobbying expenditures."

Enter Bernie Sanders who calls big money a wholesale purchase of political power. In May he called for “a political revolution” against “the billionaire class.” He has vowed never to accept PAC money and The Guardian reports:


“For the last 30 years I’ve been standing up for the working families of this country,” he said, “and I think I’m the only candidate who’s prepared to take on the billionaire class which now controls our economy and increasingly controls the political life of this country."

MSNBC says the, "2016 presidential election will be defined by big money more than any other in recent history." Won't it be dramatic when this little-known candidate who has these radical views on giving the country back to the people, snubbing his nose all along at the mega bucks is elected? Everyone will know who Bernie Sanders is then.
at June 05, 2015