Hispanics Would be Out of Their Minds to Vote Republican 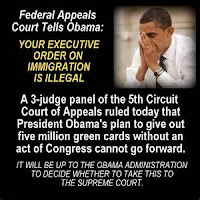 President Obama does the right thing but the courts and Congress kick him in the teeth. He issued two Executive Orders to protect the parents of American citizens and so-called “DREAMers” brought to the U.S. as young children. Their names are Deferred Action for Parental Accountability (DAPA) and an expansion to Deferred Action for Childhood Arrivals (DACA). They were enacted to protect some 4 to 5 million undocumented immigrants that the President has been trying to coax out of the shadows. Their obvious concern is deportation.

What still amazes me is why this country doesn't understand that if these people were to be deported, restaurants would be unmanned nationwide, there would be no one to work the farmers' fields, the landscaping business would be down the tube, and there would be no one to clean the homes of the rich. And if they are not going to be deported, why not take the step to legalize their residency and provide a path to citizenship. The gutless Republican Congress won't do it but Barack Obama had the balls to take these Executive Actions that the conservative courts are now shoving down his throat. Amanda Sakuma on MSNBC said these folks will probably have to wait until the summer of 2016 before the courts decide their fate.

Jordan Fabian of The Hill reports there will be no emergency request from the Justice Dept. to lift the order blocking the Executive Action. Instead, it will concentrate on an appeal to the 5th Circuit Court in July. Every Latino in this country should take note who is behind the drive to push these people back in the shadows...the GOP.