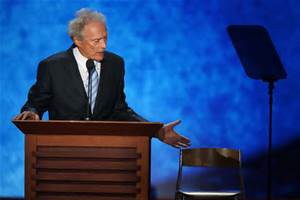 Clint Eastwood, the “Dirty Harry” star, pretended to hold a conversation with a seated, imaginary President Obama, at the 2012 Republican National Convention in Tampa, Florida. It bombed just like his recent attempt at humor at Spike TV’s Guys Choice Awards:

"Eastwood was introducing 'San Andreas' star Dwayne 'The Rock' Johnson and referenced athletes who had transitioned into acting, and then he listed “Jim Brown and Caitlyn Somebody…”

Adam Howard on MSNBC reported, "...the 'joke' drew groans instead of laughs from the audience." And Spike TV let it be known they didn't like Eastwood's comment and said the remark would be cut from the show. You have to appreciate the talent of this man based on his huge collection of work, but there comes a time when Hollywood just needs to shut up with the political remarks.
This is definitely one of them.

But it isn't the first time. Those who have already taken a shot at Jenner are Rapper Snoop Dog, Cavaliers star J.R. Smith and R&B singer Chris Brown, among others. Jenner shouldn't be concerned; she will receive the ESPYs annual Arthur Ashe Courage Award next month.