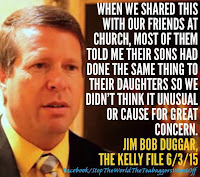 Jim Bob Duggar and his wife Michelle will say and do just about anything to keep from admitting their son Josh is a pervert. Here are some statements that evolved from their interview on Fox News that were compiled by SheKnows.com:

This whole scenario reads like a Keystone Cops movie but there is no humor in the fact that the Duggars took advantage of their religious and political positions to cover up a degenerate son's sexual deviation.