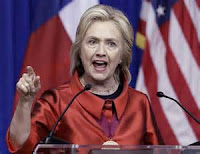 Hillary Clinton has come up with the concept that Bernie Sanders will wish he had originated and one Republicans will fight to the death. Guaranteed voting for everyone over the age of 18. She was at Texas Southern University in Houston calling for every American to be automatically registered to vote when they turn 18 unless they choose not to be. In 2013 SCOTUS weakened the Voting Rights Act of 1965 by allowing new restrictions on those wanting to vote. Hillary's proposed law would re enable millions who have suffered limits to their voting rights.


Is it possible Clinton's voting rights legislation will not only help a Democrat win the presidency in 2016, but, if used in those congressional districts up for election, help win back the House and Senate for the Dems? Hell yes I say!

Zachary Roth of MSNBC says, "it could put the GOP on notice that further efforts to make voting harder may backfire by giving Democrats a tool to motivate their supporters." Clinton chastised her Republican opponents not to continue “fearmongering about a phantom epidemic of voter fraud.” And here are a couple of facts from Roth to support the candidate's proposal: 1) Between one quarter and one third of all Americans aren’t registered to vote. 2) Around 50 million eligible voters aren’t registered, according to a recent study by the Center for Popular Democracy, based on Census Bureau data.
But if history repeats itself, the GOP will leave no rock unturned that could prevent Democrats from voting.
at June 08, 2015