THIS POPE IS AWESOME 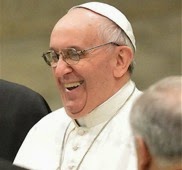 Pope Francis took a stand on homosexuality, although not endorsing it, rather, lightening the load on the church's LGBT community. He acknowledged climate change and the need to do something now. And his latest cause is to support women's rights to be paid the same as men. The homosexuality issue is progressing through the Supreme Court right now, climate change seems to be getting more attention, even around the world, but a woman's right to make the same kind of money as her male counterpart is going nowhere. Despite the Equal Pay Act of 1963, women working full time earn only 77% as much as the guy in the next office doing exactly the same job. How do you justify that in a civilized nation? You don't, you just write it off to those insecure bubbas out there who apparently aren't too sure about their masculinity.
at April 30, 2015