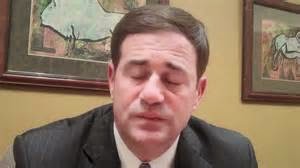 First, Gov. Doug Ducey proposed cutting Arizona education budgets to fund private prisons. Then Dr. Gov. Ducey declares his medical credentials in the passage of  Senate Bill 1318, termed "voodoo"  medicine, "ordering that henceforth doctors must tell women that drug-induced abortions might be reversible." Not possible scientifically and the first state in the nation to do this reports Laurie Roberts in the AZ Republic. He's joined by Arizona radical, Cathi Herrod, of the Center for Arizona Policy, another home-grown bunch of fanatics. A couple of doctors here in the state who are experts in the field of abortions say it's not only bad but it could be dangerous.

If you hang around long enough I'll have more of these gems for you. Thought we had rid the state of crackpots like former governor Jan Brewer but apparently Ducey has picked up the mantle.
at April 07, 2015