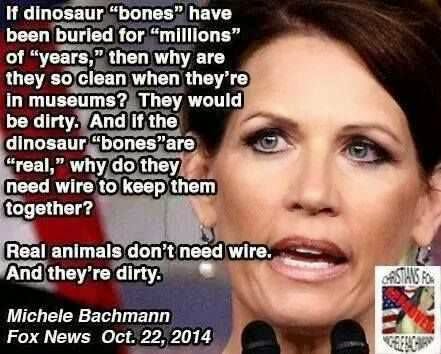 This quote here says it all from one of the looniest people ever to crash the political scene. But she actually topped it exclaiming in a recent MSNBC article that the end is near--the Rapture to fundamentalists--and it is all Barack Obama's fault. Now the President has been blamed for just about everything from ruining the U.S. economy, which was clearly the fault of Geo. W. Bush, to playing footsie with Iran on the nuclear deal. But not causing the end of the world until batty Bachmann claimed the end is near, thanks to President Obama. Here's another of this screwball's quotes, "If we took away the minimum wage -- if conceivably it was gone -- we could potentially virtually wipe out unemployment completely because we would be able to offer jobs at whatever level." But my favorite is, "Our movement at its core is an intellectual movement," talking about the Tea Party. Now that's the laugh of the century.
at April 22, 2015