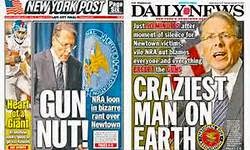 An unnerved National Rifle Assn. opened its 2015 convention in Nashville, TN, yesterday and what was on the agenda? Hillary Clinton bashing by wacky Wayne LaPierre with a generous sprinkling of digs by the GOP Presidential candidates present. The 70,000 attendees, mostly conservative, white, and male, listened to the maniac of munitions rant on why these poor souls in the audience should buy more guns and convince their congressional representative that there should be absolutely no more gun laws that curb guns like assault weapons. Gov. Sam Brownback of Kansas probably received a standing ovation based on his recent law that relinquishes guns to a warm body. I don't know if Hillary has it in her to fight for more reasonable gun laws but I know Elizabeth Warren does.
at April 11, 2015