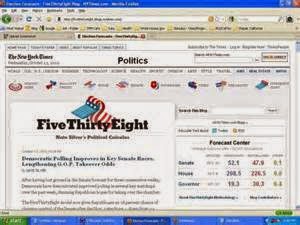 Nate Silver, founder of the website 538 Politics, has taken his place among the political analysts of today due to his methods in computer modeling and the aggregation of polling results. His results stem from the fact that with all the crunching of numbers including demographics, he has a feel for the political scene. So with Hillary Clinton's announcement today that she is running for President, Silver believes she is "likely to win the nomination." She has 27 Democratic Senators endorsing her campaign, far more than any party nominee back to Ronald Reagan. He seals it with the fact these endorsements are coming from the left, center and right of the Democratic caucus. Solid support. Factors for the general election: (1 Obama's popularity when he exits, it is average now: (2 The economy, it's good for now; (3 "The Electoral College And The 'Emerging Democratic Majority,'” and the demographic trends that favor the party. If you're passionate about 2016 I suggest you start following 538 Politics now.
at April 12, 2015