AN INFORMED VOTER DOES NOT VOTE REPUBLICAN 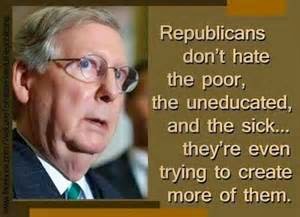 Political researchers have said, “When uninformed citizens receive political information, they systematically shift their political preferences away from the Republican Party and toward the Democrats," according to Aljazeera America. That says mountains about Republican voters who depend on the negativity of the GOP, accompanied by Fox (faux) News, and the Tea Party to make their decisions. If putting down their opponents isn't enough, Republicans resort to hate for their message. It is what I call trickle down abomination and seems to be a formula that has worked for the GOP.

Because there is no opposition from Progressives, like...voting.
at April 10, 2015