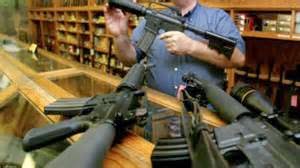 When a criminal wants a gun he or she doesn't steal it like cops and the National Rifle Assn.tell us. They obtain it through a legal straw purchase, which means getting someone else with the right credentials to buy it for them. The next source is legally licensed but corrupt at-home and commercial gun dealers. And these same Federal Firearms Licensees (FFLs), also report lost, missing or stolen firearms every year, a total of 23,775 since September of 1994. National Public Radio also reports that people arrested for a crime using a gun say, "it is easy to obtain guns illegally." What this tells us is that there are a lot of irresponsible gun owners out there buying guns for criminals. Plus almost 10,000 corrupt gun dealers willing to sell guns to anyone, including criminals. And the National Rifle Assn. insists we need even more guns on the street.
at April 27, 2015