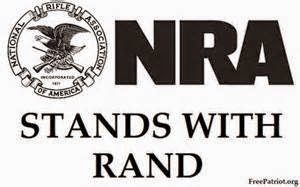 APPARENTLY NOT. Poor baby was not invited to Wacky Wayne LaPierre's party at his National Rifle Assn. affair last weekend held in Nashville. Rand Paul and his staff claim it is due to his ties to the National Association for Gun Rights. I don't know which organization is worse. Others were left out like Lindsey Graham and Mike Huckabee but after some sucking up to the NRA, they were invited. It is pathetic when a U.S. Senator and former Governor have to kiss WW's ass to get an invite to his movable feast. However, Paul's snub is not because he isn't a firm believer in the 2nd Amendment. He is. But the gun control advocates have recently announced to new approach to their goals. Where Republican Governors and state legislatures control many states, thus, loose gun laws, the new efforts are aimed at state ballot measures. Former New York Mayor Michael Bloomberg is bankrolling the movement. Watch for a ballot in your state.
at April 13, 2015