AN ANGRY GUN NUT COULD LIVE NEXT DOOR TO YOU 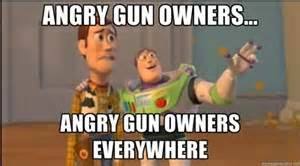 There are around 300 million guns in the U.S. That's 90 per 100 residents, which comes out to 2.4 per household. You'd think we were preparing for a war. What is even more shocking is that 4.8 million of those households, approximately 5%, have someone living in them who is pissed off at the world and they have a gun or guns. They aren't all gun nuts and you can read the definition of this bonehead here. When you boil it down to figures like this it makes the statement, 'There are too many guns in America' believable. Even wacky Wayne LaPierre should be able to understand hard facts like this. But he doesn't. This weekend, WW will be in Nashville at the NRA convention telling all his gun nut minions that no matter what, they have to run out now and buy more guns.
at April 09, 2015