FREDERICK'S OF HOLLYWOOD GOES DOWN...BUT ONLY SO FAR 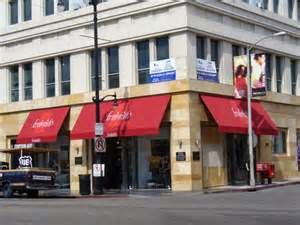 Okay, so this may not be the most political post of the year but what it has to say about modern sexuality is significant. You are looking at the store opened by Frederick Mellinger in 1947, that was later moved west down Hollywood Boulevard to larger quarters next to the corporate offices. I became associated with Frederick's in the early 1970s, while employed in Los Angeles with one of the largest general merchandise catalogs in the country. I made friends with Joe Nussbaum, their Marketing V.P. and this carried over into when I became a data broker later selling Frederick's names.

Joe was the classic example of the little Jewish, very family man that you'd never expect running a nudies catalog. In the early days when I first came on board, the girls were drawn with what attire they wore and there were no live models. I even had trouble getting an approval from some list owners that were hesitant about exposing the Frederick's catalog to their customers. Business was good and I was even invited to lunch one day with Joe Nussbaum and the man, Fred Mellinger. We talked about everything but naked girls at the restaurant of choice, the Musso and Frank Grill, just up the street from their offices on the boulevard. I considered it an honor but never saw Mellinger again as he quietly began retiring, leaving the running of the business to Joe.

The old catalog was cleverly drawn with emphasis in the right places. It worked but looking around the industry other catalogs were taking on the glossier look and most were using live models. The decision was made by Frederick's to switch and the planning began. Finally they were ready and I got a call one afternoon from Joe Nussbaum telling me that I should be in his office the next morning if possible. When I arrived Joe said nothing but, "Follow me," We went up to the next floor and entered this huge room where several models were running around in different stages of dress and undress. Some were completely nude in the process of changing undies.

My host had a grin on his face that said, "How about that?" However, the girls were completely unaffected by the would be voyeurs in the room. Joe said I was making history since this was Frederick's first live model shoot and I have never forgotten the honor. It was Fred Mellinger that started taking the clothes off beautiful women in the late 1940s, featuring the risque attire that would eventually introduce the mini skirt and hot pants in the 1970s. When you look at the women's fashion in 2015, you can see a little bit of Frederick's of Hollywood in many of them. But alas, everything must come to an end when Frederick's just announced it is closing all its retail stores. The only place you can buy their fashions in the future is from a catalog...with live models...and I was there first.
at April 25, 2015