DICK CHENEY'S HALLIBURTON GETS RETRIBUTION, BUT... 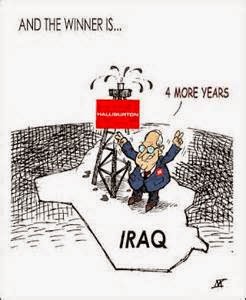 Dick Cheney's Halliburton which mopped up in the Afghan and Iraq wars is suffering due to the low oil prices. That would normally be admirable based on their lousy reputation as a less than desirable company. However, the "BUT" is the fact that it has resulted in them laying off 9,000 from its payroll, innocent souls from a corporation with a long list of bad reps. I Googled "halliburton bad reputation" and came up with 34,200 hits. It dates back at least to 2005, after Cheney had left the company to become Geo. W. Bush's Vice President. In that year H exposed military and civilian personnel to contaminated water in Iraq. In another instance, they pled guilty to destruction of critical evidence after the Gulf of Mexico oil spill in 2010. The list goes on and on. Long before Bush bombed Iraq, H worked secretly with VP Dick Cheney for his alma mater to control the world's second largest oil reserves. In 2013 H made it into the top ten list of the worst companies alongside the worst of the worst, AIG.

So retribution is certainly due, although it is too bad it can't have more of a major impact on Dick Cheney.
at April 24, 2015