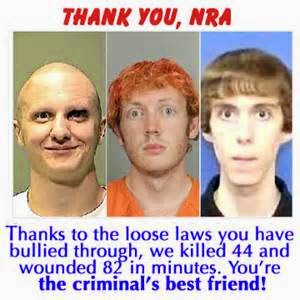 I touched on this in an earlier post, “NRA wants to weakenVirginia Gun Violence Prevention Law.” but the mentally ill factor deserves more coverage. Although the Newtown shooting was horrendous due to the number of young children shot and killed, the Virginia Tech massacre in 2007, was the worst ever. Seung-Hui Cho shot and killed 32 people and injured 17 others. He was mentally ill. MSNBC provides some background: the Gun Control Act of 1968, prompted by the assassinations of John and Robert Kennedy, Martin Luther King Jr. and Malcolm X, said once you were banned you stayed banned. After Virginia Tech, Congress passed the NICS Improvements Amendment Act, requiring states to submit mental health records to the national database.
After consideration, the NRA said this is no good for their membership. But you could pass it, if first the words "mentally defective" in the amendment were more narrowly defined, which I am guessing would keep it from identifying many of their members. Second there had to be an easier way for those deemed mentally unbalanced to get their guns back. Meaning some backwoods justice of the peace could say, "Halleluiah, they have been cured." A doctor's order would even be sufficient to get back his or her arsenal. The Gun Control Act of 1968 blown to smithereens. Does anyone else get just how stupid this all sounds?
And doesn't this remind you of the fact that Iowa wants to arm the blind.
at June 09, 2014