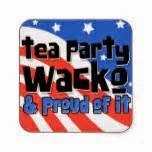 Two people posting on Facebook have taken offense to my comments degrading the Tea Party calling them some favorite names like fruitcakes, idiots and morons. One such comment read,  "They do seem to be monolithic in their thinking. The other thing they do is rather than debate the merits of issues, they demonize, deride, and dismiss those who disagree with them," based on me calling them fruitcakes for their eternal bitching over President Obama, the borders, the Constitution, a balanced budget and the list goes on. But when they come up with a solution to problems it is usually looney tunes.

So I decided to do regular posts now showing why I use designations like fruitcakes, idiots and morons for Tea Party members based on these very members' comments. Here is why I use these pet names...

“You would be giving off more CO2 if you are riding a bike than driving in a car.”  – Ed Orcutt, Washington GOP State Rep., stating that bicycles pollute the environment more than cars do.


“I think the right approach is to accept this horribly created — in the sense of rape — but nevertheless a gift in a very broken way, the gift of human life, and accept what God has given to you… rape victims should make the best of a bad situation.” – Rick Santorum


“When a physician removes a child from a woman, that is the largest organ in a body. That’s a big thing. That’s a big surgery. You don’t have any other organs in your body that are bigger than that.”  – Mary Sue McClurkin, Alabama GOP State Rep.
Thanks to the Americans against the Tea Party site for these quotes
at June 13, 2014