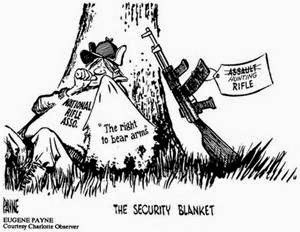 So what the hell do you call them, a reunion for gun nuts? This gaggle of reality restricted gun lovers over life complains the media "race[s] to label anything with a gun as a shooting." Although not directly related to the Isla Vista California shootings--oh sorry, I meant to say a completely innocuous use of firearms to kill innocent people in order to protect the rights of the radical double digit gun culture--the video was released right after that killing spree. Maybe the NRA is just pissed since in Santa Barbara three people were stabbed, only three killed with a gun; how could this killer be so inconsiderate to use a knife. Strange reasoning but then we're talking about the National Rifle Assn. The above article points out, "Firearms are used in 69.3 percent of murders. Of 37 public mass killings between 2006 and 2013, 33 involved firearms..." All gun control advocates eagerly await the latest epiphany from wacky Wayne LaPierre, NRA head.