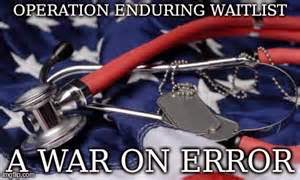 I live in Phoenix and when the news broke from a Dr. Sam Foote that there were shenanigans within the VA Hospital here we all thought it was just a carry-over from the state bureaucracy run by a bunch of incompetent conservatives that have trouble finding their way home in the evening.  It wasn't, and now we know the extent of this systemic problem. It goes all the way up to the White House and many believe that the administration and Shinseki had early warnings that were either ignored or not acknowledged. Montel Williams, a veteran himself, put it into perspective.