FAULT FOR GUN VIOLENCE PLACED EVERYWHERE BUT WHERE IT BELONGS...THE NRA 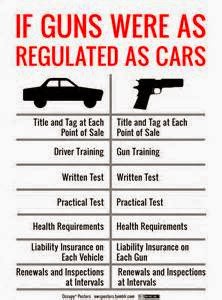 It's the media, it's the criminal world, it's video games, it's the U.S. government. The National Rifle Assn.'s list goes on and on but fails to identify the real reason we have so much gun violence in this country: The NRA. It's opposition to reasonable gun control, things like background checks. Wacky Wayne LaPierre, NRA head, has one solution to the problem: more guns. Based on the U.S. Bureau of Alcohol, Tobacco, Firearms and Explosives, there are about 300 million guns in the United States. Access to firearms is about as easy as getting an ice cream cone, maybe easier. So we need more?

Missouri repealed a law requiring background checks leading to a 16 percent increase in the state murder rate, according to  Johns Hopkins Center for Gun Policy and Research in Think Progress. Another study from this site reports that states, "...with more expansive background check laws experience 48 percent less gun trafficking, 38 percent fewer deaths of women shot by intimate partners, and 17 percent fewer firearms involved in aggravated assaults. How many facts like this are necessary to convince Congress and...wacky Wayne?