Donald Trump's Sunday tweet says, “fear of the virus cannot collapse our economy,” which is correct but will indicate a softening on the COVID-19 FIGHT to some 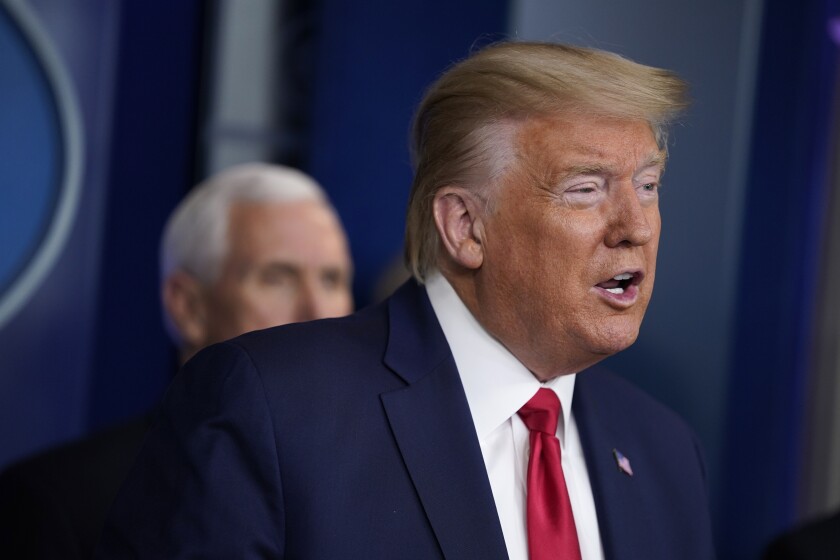 We had a conversation recently with someone who is a staunch T-rump supporter who stated to my wife when she spoke of the seriousness of the virus, 'Oh, it's just a virus." That is about as irresponsible as it gets considering just about any virus should be approached as something to worry about. But these people just follow Trump's lead and when he takes the least bit of emphasis off something they have acknowledged as an inconvenience, they run with it.

And that is what will happen now that the Oval Office lunatic seems to be prioritizing the economy over the coronavirus pandemic and rashly making a comparison with why quarantine virus cases, "at a time when officials are considering releasing nonviolent elderly criminals." This makes no sense, but, then, nothing Donald Trump ever says makes much sense. He does have a positive when advocating social distancing so the virus would “have no place to go.”

House Speaker Nancy Pelosi (D-Calif.) has called Trump's approach to the COVID-19 pandemic a "scatter-shot response to the crisis." She has more to say...


“The president will not take responsibility,” she said. “He’s a notion-monger, just tossing out things that have no relationship to a well-coordinated science-based governmentwide response to this. Thank God for the governors, who are taking the leads in their states, and for some of the people in the administration, who speak truth to power.”

A good illustration of the number of double-digits in Donald Trump's camp...no matter what...


It is easy to detect in these statements the fact that he is still highly concerned that a down economy will hurt his chances for election, and he has made it perfectly clear in the past that he will let nothing interfere with this. Here's what he said earlier in March...


"President Trump has boasted for months that the booming stock market, low unemployment and strong economy leave Americans 'no choice' but to give him a second term in November — 'whether you love me or hate me.'”

And then the bottom dropped out with the coronavirus heightening, followed by the White house maniac's slow response to the onslaught of the disease putting us second from the bottom in testing with seven other major nations. Now he is desperate to fix the problem before the election in order to prove he is the hero of the people, their savior, as he would like to think. And this is where the idiot's efforts will be spent, and we may end up with no election in November.
READ MORE..
at March 23, 2020