How high can Trump lies soar?


How do you explain 81 Donald Trump lies in one week to your children? You can't. 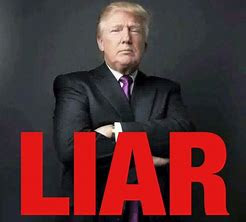 By the CNN count last week's Donald Trump lies "tied for the fifth-highest total in the 27 weeks we have counted at CNN. He lied 81 times with the usual arrogance of someone who is completely comfortable as a narcissist buffoon. No one can blame Trudeau and company plus Putin and Assad for making fun of him behind his back. Trump's idiocy is universal and could be sold for a brand as equal to Holiday Inns or Proctor & Gamble. The whole world recognizes it.

"It was an eclectic batch of dishonesty. Among other things, Trump took unearned credit for both the Ethiopia-Eritrea peace agreement and for the drop in the US cancer death rate, absurdly claimed that NATO "had no money" before his presidency, wrongly denied that his golf excursions cost taxpayers any money, and repeated his usual varied inaccuracies about impeachment, immigration and the nuclear agreement with Iran."

After the 81 record false claims last week, his average was around 61 per week, and shows no signs of slowing down. Trump is dying for a Nobel, something that would lower this award to something less than imaginable. At a recent rally, "he claimed that he was a more deserving recipient than Ethiopian Prime Minister Abiy Ahmed." Ahmed received the 2019 Nobel Peace Prize for his part making a peace deal with neighboring Eritrea.

It was for settling a border dispute with this neighboring country, something Donald Trump could learn from rather than criticizing Ahmed's award. Pathetic!
READ MORE...
at January 19, 2020