Who says nobody likes Bernie Sanders? 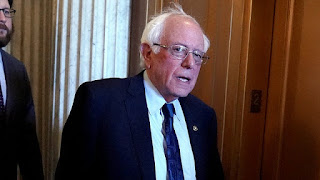 Here is Newsweek's headline: "#ILIKEBERNIE TRENDS AFTER HILLARY CLINTON SAYS 'NOBODY LIKES' BERNIE SANDERS." This sent Bernie's supporters to the Internet in the thousands to show just how much they do like Bernie Sanders. And you would think someone as disliked as Clinton was in 2016, when she and Debbie Wasserman Schultz colluded to secretly give the Democratic nomination to Hillary, would keep her mouth shut. But she didn't, and now it is clear who the most liked of the two is.


Clinton even indicated the possibility that she might not support Sanders if he receives the nomination for this November's election. This at a time when Bernie is surging in the polls...

"Overall, 27% of registered voters who are Democrats or Democratic-leaning independents back Sanders, while 24% favor Biden."

It is clear moderate Democrats are hell-bound to knock Bernie Sanders out of the race simply because he is both Progressive and an Independent. It isn't working because there are 57.7 million Progressives out there and of the 137.4 million Independents, 52% are Progressive, Get used to it old line Democrats.   READ MORE...
at January 22, 2020