Did NRA cooperate with Russians and Trump in 2016 election? 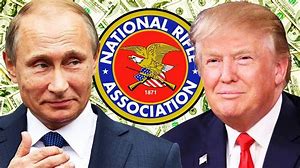 Democrats on the Senate Judiciary Committee issued a report Wednesday suggesting that Russia, "used connections to the NRA 'as a means of accessing and assisting Mr. Trump and his [2016] campaign.'" This Russian connection re. the influencing of the 2016 election in Donald Trump's favor becomes more bizarre by the week. The NRA reportedly did donate $30 million to Donald Trump's election campaign. And Special Prosecutor Robert Mueller has his investigation going but a McClatchy report in January said...


"the FBI was investigating whether a top Russian banker funneled money to the powerful gun lobby group [the NRA] to aid Trump's underdog campaign."

About that time Hillary Clinton was way over-confident being 25 points ahead. And this points out the fact so effectively, all it takes to elect an idiot to the Oval Office in this country is money. It's all quite complicated involving Alexander Torshin of Russia's central bank, Russian President Vladimir Putin, and Maria Butina, a Torshin protege, who founded the Russian group Right to Bear Arms. During the campaign...


"Mr. Torshin, Ms. Butina, and their intermediaries repeatedly offered the campaign back channels to Russia and relayed requests from President Putin to meet with Mr. Trump,"

The NRA declined to disclose their sources of "dark" contributions received, those identified are not required to be made public. With this dark money remaining secret, if the NRA really wanted to prove their innocence in this issue, they would certainly want to release these records. Barring this release, it is appropriate to be suspicious of Wayne LaPierre's National Rifle Assn. as a co-conspirator in the Russian election investigation.
at May 19, 2018