There is only one gun store in Mexico, just outside Mexico City, heavily guarded on a Military base. To even get inside the store, buyers must go through months of background checks. And Mexico has its own 2nd Amendment, but it stipulates that federal law "will determine the cases, conditions, requirements and places" of gun ownership. And while each day the army gun store sells only an average of just 38 firearms to civilians, "an estimated 580 weapons are smuggled into Mexico from the United States." Clearly, their problem is U.S. gun laws, making more guns available to the public. 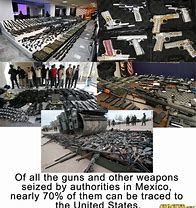 "About 70% of guns recovered by Mexican law enforcement officials from 2011 to 2016 were originally purchased from legal gun dealers in the United States, according to the Bureau of Alcohol, Tobacco, Firearms and Explosives."

How does this all stack up? It's the American connection where the National Rifle Assn.'s head gun nut, Wayne LaPierre, believes in spreading guns around the country like the spreading of seeds by farmers in the Spring planting. Guns proliferate on the streets much like the crops in the fields. Except, they end up killing the innocent rather than feeding the hungry. It's an American tradition that is now seriously affecting our southern neighbor, adding to the drug cartel violence. There are 67,000 licensed gun dealers and gun shows in this country, the latter where just a warm body can buy a gun.

Mexico has a ban on assault weapons but, once again, enough come across the U.S. border to satisfy the appetite of the bad guys, especially cartels, in this case. Chelsea Parsons of the Center for American Progress touts the problems of International drug trafficking in a report that "found that 66% of Mexico's homicides were committed with a gun in 2017, up from 15% in 1997." It's beginning to look more and more like the U.S. and they don't like it. Ricardo Anaya of the National Action Party said recently...

Illegal immigrants coming north and illegal guns going south. What should be the priority with such a good nation that has been our partner for years?
at May 26, 2018