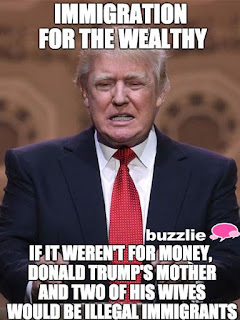 Said from a White House round table this past Wednesday while continuing...


“You wouldn’t believe how bad these people are. These aren’t people. These are animals. And we’re taking them out of the country at a level and at a rate that’s never happened before. And because of the weak laws, they come in fast, we get them, we release them, we get them again, we bring them out. It's crazy.”

Sounds like Donald Trump is running for 2020 with the same rhetoric he used in 2016. Author Clint Smith in Vanity Fair, pointed to the Holocaust and the Rwandan genocide...


“It’s easy to dismiss what Trump said as nonsense . . . but there is a long tradition of entire groups of people being likened to animals before [and] during periods of mass violence against them."

Sarah Huckabee Sanders said T-rump was referring to only the MS-13 gang but after listening to the full manuscript it is, "abundantly clear that the president, while responding in part to a prompt regarding the MS-13 gang, was in fact speaking generally about illegal immigration." If this doesn't raise the ire of the Hispanic community to get out the vote this November and in 2010, they can only blame themselves.
at May 20, 2018