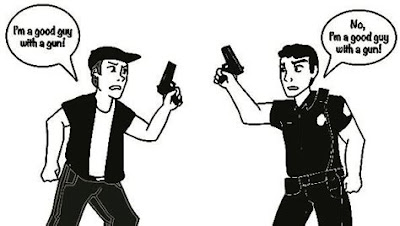 I live in gun-loving Arizona, one of 33 states where the right-to-carry law means you can swagger all around town like you are Wyatt Earp reincarnated. In Arizona you can actually take your gun into bars, schools and public buildings. The National Rifle Assn. with head gun nut, Wayne LaPierre, leading the way, has convinced these pathetic souls that their guns are more valuable than the lives of their family, friends, neighbors and innocent individuals. But all of this could be changing if an apathetic American public takes notice of new research on concealed-carry.

This all may have stemmed from the research of John Lott and David Mustard in 1997 that found more guns meant less crime, which was flawed in its findings, even certifying an increase in violence with concealed-carry through new research by legal scholars John Donohue and Abhay Aneja and economist Kyle Weber. They confirmed the following frightening statistic published in The Nation...


"Ten years after a state passes a right-to-carry law, violent crime—which includes murder, manslaughter, forcible rape, robbery, and aggravated assault—will be 13 to 15 percent higher than if the state had done nothing."

Adding to the validity of the new report is the number of years available to the researchers on which to base their analysis; those years between 1981 and 2007 when right-to-carry laws were passed, ten of those years after the John Lott and David Mustard report. The new paper took advantage of cutting-edge statistical techniques by constructing synthetic control groups for states using what’s known as a LASSO analysis to pick the best variables for comparison. Their findings were always consistent in the fact that...


"When states passed right-to-carry laws, violent crime ended up higher than it would have been otherwise."

It's time to get the cowboys and cowgirls off the street and generally begin a sweep to curb the number of guns owned in this country with some relatively tough new reasonable gun laws.
at May 29, 2018