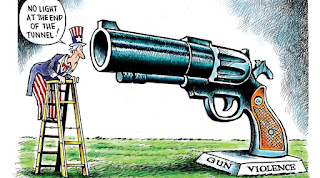 I know immigration reform is an issue that must be addressed, but currently more lives are at stake in the matter of getting guns off the street. Especially since much of the targeting has been children in respect to mass shootings. I was more than a little surprised to see a recent poll by Florida Atlantic University (FAU) Business and Economics Polling name immigration as the number one issue this fall. Now this is Florida voters in the state where the most recent gun violence massacre occurred, Parkland's Marjory Stoneman Douglas High School. You have to wonder if this is because Florida has such loose gun laws with the NRA's leading lobbyist, Marion Hammer, in residence, or is this predicting the familiar trend after major gun violence...back to public apathy.
at May 12, 2018