Can't imagine an Internet without neutrality 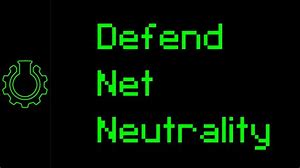 Net neutrality, according to Google, is "the principle that Internet service providers should enable access to all content and applications regardless of the source, and without favoring or blocking particular products or websites." A Republican Congress wants to repeal...


"The rules, put in place in 2015 when the FCC was controlled by Democrats, prohibited internet-service providers from selling faster delivery of certain data, slowing speeds for specific content and blocking or otherwise discriminating against any legal online material."   from the LA Times.

Amazon, Facebook, Google and Netflix are all in favor of net neutrality, which would normally raise a red flag for consumers, but Consumers Union Calls FCC’s Net Neutrality Effort “Chilling.”   Jonathan Schwantes, senior policy counsel for Consumers Union says, “Protecting net neutrality means preserving the internet as it was designed — a free, open platform for all that has spurred tremendous competition and innovation." But some Republicans say the Democrats are just politicizing the issue, because they can never win against the House and Trump's signature.

Donald Trump and his GOP minions have been knocking off all programs that favor consumers to put the business community in complete control of our lives. One Republican, Susan Collins of Maine, thinks it's wrong and is part of the group fighting the loss of net neutrality. Here's a list of the numerous rights the voting public has lost under T-rump.
at May 10, 2018