Memorial Day for the heroes 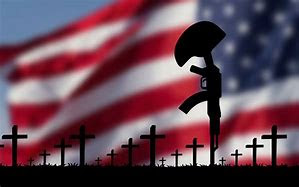 The word memorial is identified as a commemorative act to perpetuate the memory of a person, event, etc., usually carried out as a monument or a holiday. Originally known as Decoration Day, Memorial Day was inaugurated by proclamation of General John A. Logan of the Grand Army of the Republic [U.S. Army] in 1868. It was for the purpose of honoring the 620,000 soldiers killed in the Civil War. In comparison, 644,000 were killed in all other conflicts. In going to war, the participant realizes his or her chance of not coming home alive. That's a hero, and we have many of those today.

There are 22 million veterans in the U.S. (10 percent are women) meaning that 7.3 percent of all living Americans have served in the military at some point in their lives. There are lots of reasons for joining up but then there is also the draft, initiated when personnel were needed for the Korean and Vietnam Wars. In other words, the military is made up of a complex group of individuals, but no matter how they entered the service, they were there to fight for, and, if necessary, die for their country. Those that died are the ones we pay tribute to today, honoring their lives and commitment.

Here are three things you may not have known about Memorial Day...


Along with my fellow veterans and all the rest of you out there, we want to convey our gratitude to those who didn't make it back and our heartfelt thanks for your ultimate sacrifice.
at May 28, 2018