We need to say goodbye to the Democratic Party 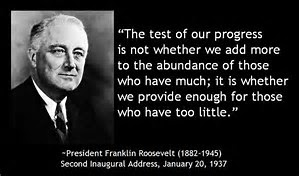 I have been a Democrat all my life; yes, even as a very young boy I remember my father talking about the Democrats and FDR, his New Deal. My dad came from a well-off family in the South, a family at one time I am almost sure had slaves. But the South was Democratic then, all the way, and it was just the right thing to be left leaning. That's changed in the last few years and the Republicans have taken over the South and turned the people there into a conservative stronghold that had a major effect on the 2016 Democratic Primary, particularly for Bernie Sanders.

Did you know Franklin Delano Roosevelt was a Democratic Socialist?

But the Democrats today hardly resemble those of FDR's era; in fact you can't even draw a close parallel these days between what they call the Party and what the Dems started out to be. FDR wasn't a Party starter for Democrats, Andrew Jackson has that honor, but Franklin Delano Roosevelt was the epitome of the Democratic Party, having served four terms in office until his death in 1945. This man set the tone for what the term liberal meant, and followed through with actions that give him a place in history as one of the greatest Presidents of all time.

Here are snippets from the democratic Platform of 1936, three years into FDR's presidency...


There are other issues like taking farmers off the road to ruin, worker's pay was increased and hours shortened, actually saved banks and paved the way for a better financial foundation, gave youth the opportunity to stay in school and get an education, which 12 years of Republican neglect had closed, and help for the unemployed. There's more and you can read the complete 1936 Democratic Party Platform here. I want to point out that in every case but one, above, the programs are for the average person, not corporations or the wealthy.

FDR, although born into a wealthy New York family, was a president of the people and his programs substantiated this, but considering the 1929 stock-market crash, some feel he could have paid more attention to a struggling economy; The Great depression lasted until 1939. It is worth noting that the Dow Jones industrial average didn't return to its summer 1929 high until 1954. But as a catalyst, Roosevelt combined a stimulus project with his goals for social equity and created the Rural Electrification Administration to wire the countryside. Perhaps FDR could have used Janet Yellen.

And why take you back all these years down the reminiscing trail to a time some 84 years ago when many of you weren't born or were too young to care what politics was all about? Well, dang it, to illustrate the stark differences in that period, that I might remind you was closer in time to that of the Founding Fathers of this country, that FDR based a lot of his concepts on. As an example, when it comes to corporations...


"To say that the founding fathers supported corporations is very absurd. Its quite the opposite in fact. Corporations like the East India Trading Company were despised by the founding fathers and they were just one reason why they chose to revolt against England. Corporations represented the moneyed interests much like they do today and they often wielded political power, sometimes to the point of governing a colony all by themselves like the Massachusetts Bay Company did."

We've come a long way from Franklin Delano Roosevelt and the journey has ended in a disjointed, confused, and divided Democratic Party that seems not to know how to repair itself. Well, it is my opinion that the Democratic Party is irreparable, therefore, dump it and start over. Progressives, in number, passed liberals a few years ago and seems to be the real new face of the Party. It appears that hard party liners like the Clintons, even Obama, do not want to accept this fact and continue to stick to ideology that just doesn't work anymore with a new generation.

It is a fact that Democrats lost more than 1,030 seats in state legislatures, governor's mansions and Congress during Barack Obama's presidency. It can't all be blamed on the man because it was Debbie Wasserman Schultz who neglected the Party as DNC head for five years, until she was recently fired, and these losses finally added up to a catastrophe for Democrats. But it is still hard to understand how the upper echelons of the Party could sit by and watch over 1,000 of their legislative and governor's seats just evaporate. To me, this is the ultimate of political incompetence.

Bernie Sanders, a Vermont Independent, ran for President as a Democrat in 2016, but lost in the Primary due to the killing machine of Debbie Wasserman Schultz as DNC chair. There were many of us who were supporters of the Bern, and many of us believe today that, until he is given the reins of the Democratic Party, it will remain in its quagmire. Bernie was asked by New York Times Magazine what the Party stands for. His response...


"You’re asking a good question, and I can’t give you a definitive answer. Certainly there are some people in the Democratic Party who want to maintain the status quo. They would rather go down with the Titanic so long as they have first-class seats."

The article indicates that his answer is partially for effect, since he does have his own liberal values for what he thinks the left should stand for. And Sen. Elizabeth Warren joins Sanders in a call for revamping the Party, but one still wonders why she didn't swallow what establishment pride she had during the Primary and throw her backing behind the Bern. It could have turned everything around, but she didn't and it didn't. And the 2018 midterms will only be a fight against the Trump administration and for congressional seats to block his legislation. First things first.