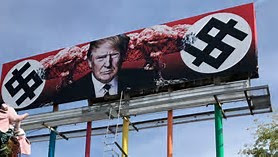 It doesn't take much to collect a full body of stupid acts on the part of the Trump administration, but in many cases they are too little for a full-coverage post so I decided to wrap a bunch into a neat bundle and present it to you today. Here they are.

7 of 10 Americans disapprove of the way Donald Trump is handling the healthcare situation. The Quinnipiac poll also found that DT, the man, is viewed poorly. He even fares worse on a Fox poll than he does on CNN re. healthcare. Donald John, in taking over the GOP's new healthcare bill, has managed to alienate the Freedom Caucus and other conservatives as well, to the extent that a vote on Thursday, March 23, had to be reschedule for today. There simply weren't enough votes on Thursday. IS OBAMACARE INVINCIBLE?

Sean Spicer doesn't like the press and so far they are returning the favor. That is the worst possible position a President's White House Press Secretary could be in, but, then, it reflects the exact position of the President he works for. In this kind of situation the President loses, but more important, the American people lose. Trump ran his 2016 campaign like a war room, and he and his administration are doing the same with the U.S. government. Following a conglomeration of muddled references to Trump's sources on the wiretaps, Spicer ends by saying Obama was helped in the wiretapping by the GCHQ, initials for the British intelligence finding agency. WHEN CONTACTED, THE BRITS SAID NO FREAKING WAY.

Donald Trump and Betsy DeVos allow student loan companies to gouge students again due to a high rise of defaults. Rather than find the cause of the unpaid loans, Trump/DeVos decided to do away with Obama's Federal Family Education Loan (FFEL) Program, forbidding agencies from charging fees for up to 16 percent of the principal and accrued interest owed on the loans, if the borrower entered the government’s loan rehabilitation program within 60 days of default. But in one case in particular, a loan company had assessed an exorbitant amount for defaulting, after agreeing to work with the student on a reduced payment schedule. PROVING...YOU CAN'T TRUST BUSINESS.

Nepotism is alive and thriving in Donald Trump's White House. Okay, the latest is that Kellyanne Conway's husband will be given a job in the Justice Department. "If confirmed by the Senate, George Conway would lead an office that would handle legal challenges to major Trump administration initiatives, such as the controversial travel ban." It started out with Jared Kushner, Ivanka Trump's husband who was made a senior adviser to the President. His first diplomatic venture ended in failure as Great Britain rebuffed his efforts to push back votes on Israeli settlements until after the inauguration, supposedly as a favor to Netanyahu. Then, big daddy's daughter, Ivanka, is set to join daddy's administration as an unspecified, but reportedly influential policy role, and with that comes an office in the West Wing and top secret security clearance. Just what we need, a gang of Trumps out there running around with secrets about this country with no idea whatsoever the importance of what they hold. IN THIS CASE, NEPOTISM SHOULD BE ILLEGAL.

Even the Germans laugh at America's White House buffoon. The Daily Beast reports, "Trump Meets the German Press, and They Laugh At Him," their headline, followed by, "The American President, meeting his German counterpart, keeps taking victory laps, ripping reporters and ignoring the substance of tough questions." You would think the world's top narcissist would back off when going to visit one of the best allies the U.S. has had for years. But German Chancellor Angela Merkel was reserved and it would appear that she might just have been willing to let Donald John hang himself. He did, even appearing "impatient and restless as he stood at the podium." He continued by mocking a German reporter and later put down the U.S. in a statement about this county's trade failures, particularly NAFTA. BETTER KEEP DT HOME CUTTING THE WHITE HOUSE LAWN.

And finally, this huge Trump billboard that was recently erected in Phoenix of a "...menacing Donald Trump... flanked by mushroom clouds and swastikas configured like dollar signs." It is the blog picture today and, surprisingly, the Trump good-ole-boys haven't gone after it. Yet. It's owner, Karen Fiorito, a California resident, says, "I think a lot of people are feeling this way and I'm just trying to express what I think is on a lot of people's minds these days," followed by, "Something that really concerned us was this idea of a dictatorship where things were going in a certain direction." And if you look very closely at Donald John, you'll see a Russian flag on his lapel. She did the same thing for George W. Bush in 2004. By the way, she says the Donald Trump billboard will stay there as long as he is in the White House. UMMM...MAYBE ENOUGH OF THESE AROUND THE COUNTRY?

HAVE A GREAT WEEKEND!