Have we been conditioned to accept T-rump's stupidity? 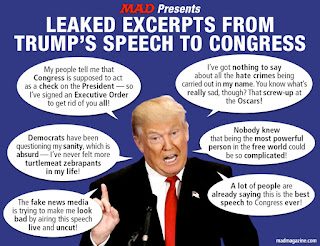 Without even having read Radley Balko's opinion in the Washington Post, I have hinted at the fact in my blog posts that the American public has become accustomed to the rantings of a psychopathic liar that has somehow taken over the White House. Here's what Balko had to say...


"...Tuesday night’s fit of demagoguery masquerading as a presidential address is a frightening demonstration of how his first month in office has left those of who are supposed to hold him accountable timid and shell-shocked."

Demagoguery, let's examine it historically along with the prevailing example. Salon was profiling Donald Trump as a modern-day demagogue back in June of 2016, five months before the election that made history and put America on a track to a sure eventual collapse. In an elaborate use of adjectives and adverbs, the website talked of the "virus infecting our politics," which had its contemporary kickoff during the George W. Bush/Karl Rove era. There are other bad actors and the whole conglomeration worked tediously together to give us what's known today as President Donald Trump.

Here's how Salon describes it...


"There have been stretches of history when this virus lay dormant. Sometimes it would flare up here and there, then fade away after a brief but fierce burst of fever. At other moments, it has spread with the speed of a firestorm, a pandemic consuming everything in its path, sucking away the oxygen of democracy and freedom."

There were others early-on who developed a formula and format for those to use in later years. Men like ...


“'Pitchfork Ben' Tillman, the South Carolina governor and senator who led vigilante terror attacks with a gang called the Red Shirts and praised the efficiency of lynch mobs."

"Mississippi’s Theodore Bilbo, a member of the Ku Klux Klan who vilified ethnic minorities and deplored the 'mongrelization' of the white race."

"Louisiana’s corrupt and dictatorial Huey Long, who promised to make 'Every Man a King.'"

The demagogue that stands out in U.S. history is Joseph McCarthy, US senator from Wisconsin, that Salon describes, "...until now perhaps our most destructive demagogue." Until now. McCarthyism was another psychopathic lunatic's way of drawing attention to himself by terrorizing the country into believing there was a Communist under every rock. There weren't, and several lives were ruined in the process. I had a close friend in Los Angeles who was a movie screenwriter who knew a few fellow writers whose lives were affected. And tailgunner Joe didn't even have a bully pulpit.

Remember Roy Cohn, he was chief counsel to McCarthy’s Senate Permanent Subcommittee and wouldn't you know it, the bad seed is back. As Salon put it, "Cohn was McCarthy’s henchman, a master of dark deeds and dirty tricks. "Cohn didn't go down with McCarthy when Edward R. Murrow exposed him on his CBS show, "See it Now." But not Cohn, who continued his operations in New York where he ended up working for mob bosses and, yes, Donald Trump's father, Fred, until later years when he made his McCarthy-like methods of strong-arm manipulation available to Donald.

Bernie Sanders on what Donald Trump did not say in his speech to Congress:

Cohn also introduced Trump to the man who was his campaign chair, Paul Manafort, someone who made a fortune representing dictators. Salon has an interesting analogy between Joseph McCarthy and Donald Trump...

"So the ghost of Joseph McCarthy lives on in Donald Trump as he accuses President Obama of treason, slanders women, mocks people with disabilities and impugns every politician or journalist who dares call him out for the liar and bamboozler he is. The ghosts of all the past American demagogues live on in him as well, although none of them have ever been so dangerous."

Returning to the present and Balko's charge that Donald John has conditioned us to just accept him the way he is and go on with our business, letting him run the country in the ground. Balko says, "We need to be better than that." And we should. The writer comments...


"We’ve been conditioned to accept behavior from the leader of the most powerful nation on Earth that we’d never have accepted from his predecessors (and I have pretty low expectations of presidents) — that we’d never accept from a friend, relative, pastor or community leader — as long as he spares us and our group from his attacks."

Trump's speech to Congress included the same lies that we have heard over and over, except that this time he delivered them in a toned-down rhetoric that is as much like the normal Trump as Scotch is like bourbon. Where it came from I do not know, but I suspect it is another of his underhanded tactics to appease a few concerned Republicans along the way who get their skivvies in a dither when he's too much the bad boy. Balko is really up in arms over the bi-partisan praise when this wasn't the man talking who has been ranting and raving such absurdities for his first month in office.

Balko disparages Trump's speech grammar, saying it was "terribly written," and "full of his typical doom-and-gloom pronouncements about America," quoting one of his most egregious passages...


"Recent threats targeting Jewish community centers and vandalism of Jewish cemeteries, as well as last week’s shooting in Kansas City, remind us that while we may be a nation divided on policies, we are a country that stands united in condemning hate and evil in all its forms."

Just hours before the speech Donald John had indicated that some of the attacks, above, had been perpetrated by Jews themselves. More extreme exaggeration almost to the point of lying...


"We’ve defended the borders of other nations, while leaving our own borders wide open, for anyone to cross — and for drugs to pour in at a now unprecedented rate."

At best, this statement is borderline bogus. More on drugs...


"I have further ordered the Departments of Homeland Security and Justice, along with the Department of State and the Director of National Intelligence, to coordinate an aggressive strategy to dismantle the criminal cartels that have spread across our nation."

Balko documents that when George W. Bush attempted the same thing, by coercing the Mexican


"It is not compassionate, but reckless, to allow uncontrolled entry from places where proper vetting cannot occur. Those given the high honor of admission to the United States should support this country and love its people and its values. We cannot allow a beachhead of terrorism to form inside America — we cannot allow our nation to become a sanctuary for extremists."

Now here's a refuting fact, "The odds of your average American being killed by a terrorist attack committed by a refugee are astronomical, about one in 3.6 billion."

There is more and Radley Balko's opinion is chock full of solid facts and a good reasoning where the United States stands after only a month of the reign of Donald Trump you can read here. It's up to us where we go from there.
at March 06, 2017