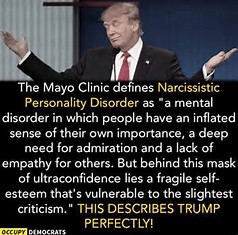 Hawaiian judge, Derrick K. Watson, has shot down Donald Trump's latest attempt to keep immigrants out of the United States. His decision had a great deal to do with the running off at the mouth by Donald John and his bootlicking advisers. To backtrack, the way this man was elected was to trash the America we know and tell all his followers he could make America better, in his words "Make America Great Again." It is his bluster and buffoonery that these poor souls follow, so it is just natural to keep up the act to maintain his popularity. At the expense of our country, of course.

Had he and his minions tempered their statements following the introduction of the second travel ban, Judge Watson might have given it more serious thought, although his decision would have probably been the same, based on substance. This is very similar to Trump's claims of Trump Tower wiretapping, where, against seemingly insurmountable odds, he continues to pursue his charges. The Washington Post reported...


“Based on the information available to us, we see no indications that Trump Tower was the subject of surveillance by any element of the United States government either before or after Election Day 2016,” the Democratic and Republican chairmen of the Senate Intelligence Committee said Thursday in a statement.
“He stands by it,” White House press secretary Sean Spicer said of Trump’s original claim.

Politico says, "The federal courts were poised to hold the first version unconstitutional. But it’s not at all clear that the new order will survive judicial scrutiny, either." However, liberal lawyer, Alan Dershowitz, says Trump could win before the Supreme Court. In both cases, just another example of the fact that Donald Trump thinks he can never be wrong, and to carry out his hissy fits he ties up departments of government to carry out his unfounded charges. It is a classic case of putting an oversized ego in front of what is best for his country, and it is totally pathetic...again.
at March 18, 2017